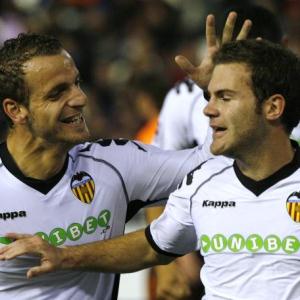 Valencia qualified for the last 16 of the Champions League in style with another emphatic victory over Group C whipping boys Bursaspor this evening.

Los Che, who beat the Turkish side 4-0 away from home in their first meeting, had the match all but wrapped up by half-time after blitzing their opponents with four goals in a stunning 20-minute spell in the opening period.

Attacking quartet Juan Manuel Mata, Roberto Soldado, Aritz Aduriz and Joaquin Sanchez were all on the scoresheet prior to the interval, while Soldado and Alejandro Dominguez added further goals in the second half for Unai Emery’s side, who might have won by an even bigger margin.

The victory means the Primera Division outfit are now assured of a top-two finish in Group C and will play Manchester United for first place at Old Trafford in the final round of fixtures. United stayed three points clear of Los Che after beating Rangers this evening.

For Bursaspor, who netted a consolation goal through Pablo Batalla when 5-0 behind, a fifth successive loss means they are now certain to finish bottom of the standings.