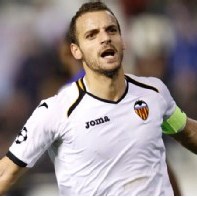 The striker scored all three of his goals before half-time after Jonas had broken the deadlock in the 10th minute.

The away side felt they were denied a clear penalty with just six minutes on the clock, but soon found themselves out of reach with things getting worse in the second half courtesy of Pablo Hernandez, Adruiz and Alberto Costa.

Only the superb shot stopping of Hungarian keeper Laszlo Koteles prevented the score from reaching double figures, but nonetheless Genk have now been eliminated from European competition this season, unable to even make the Europa League-assuring third place in Group E on match day six.

Knowing their European survival was on the line, Genk went into the game with a nothing-to-lose mentality and looked to take the match to their much-fancied hosts.