It has been reported that Valencia are keeping tabs on Ander Herrera’s situation at Manchester United. 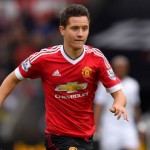 The former Athletic Bilbao midfielder has found his United future under threat after the arrivals of Bastian Schweinsteiger and Morgan Schneiderlin this summer.

Fichajes.com claims that Valencia, where super agent Jorge Mendes has a big influence, are keeping a close watch on developments involving Herrera.

The goalscoring midfielder is also on the shopping list of Barcelona football chief Robert Fernandez.

Herrera is considered as a natural replacement for Xavi, now of Al Sadd, at Barca.