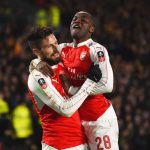 Reports have emerged claiming that Valencia have made a move for Arsenal attacker Joel Campbell.

Estadio Deportivo reported that Campbell signed for the Gunners from Costa Rican side Deportivo Saprissa in 2011 but has failed to nail down a first-team place at the Emirates.

The 24-year-old made 30 appearances for Arsenal last season but could be allowed to leave this summer.

It is said Arsenal are open to exploring the option of both a loan or a permanent deal, with Valencia boss Pako Ayestaran keen to secure his signature as he looks to bolster his attacking ranks ahead of the new season.