It has been reported that Manchester United must pay huge money to sign Valencia defender Nicolas Otamendi. 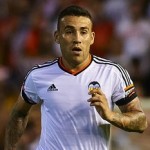 The Mirror claims that United will have to pay £40million for Otamendi.

The Argentinian centre-half has been linked with a move to Old Trafford in January as Louis van Gaal looks to bolster his squad.

The United boss is desperately short at the back. But the Spanish club will not shift from their £40m buy-out clause and insist they do not want to sell.

The 26-year-old only made his Valencia debut in August, having begun a five-year deal in July following a £9.3million move from Porto.