Reports are out claiming that Valencia are shopping in England for a new goalkeeper. 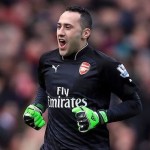 Superdeporte claims that Manchester United keeper Victor Valdes and Arsenal’s David Ospina are both under consideration.

Ospina admitted last week that he could move on this summer, with Everton also interested in the Colombian.

Valdes has been linked with Real Madrid today. Manchester United Ready To Move In For Lassana Diarra