It has been reported that Esteban Cambiasso is weighing up a return to Spain. 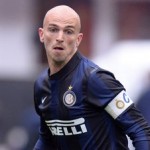 However, Valencia have also made contact with the former Real Madrid man.

The 33 year old is keen on testing himself in England, but the former Argentine international is yet to field any concrete contract offers from interested Premier League clubs.

Valencia, under new owner Peter Lim, now boast the spending power to compete with the likes of Mauricio Pochettino’s Spurs. West Ham In Talks With Tottenham For Emmanuel Adebayor