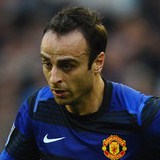 It has been revealed that Manchester United face losing striker Dimitar Berbatov.

The Sunday Express has reported that the Bulgarian striker is at the centre of a tug-of-war between Valencia and Paris Saint-Germain.

Both clubs are trying to tempt the out-of-form Manchester United striker away from Old Trafford in January.

The former Tottenham star has made just three Premier League appearances this season.