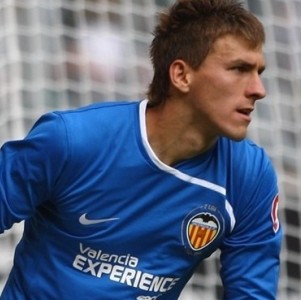 Reports are out claiming that Valencia goalkeeper Vicente Guaita has attracted the interest of Premier League giant Manchester United.

The 23-year-old shot stopper spent last season on loan at Segunda Divison side Recreativo Huelva, but has been thrust into the spotlight this season after injuries to the veteran Cesar Sanchez and Miguel Angel Moya.

It is said that Sir Alex Ferguson is reported to have been so impressed with Guaita during their Champions League clash on Wednesday that he enquired as to the Spaniard’s availability immediately after the match.

Guaita has made three appearances for Valencia this year, and received the Segunda Division’s Zamora Trophy – awarded to the goalkeeper with the lowest goals-to-games ratio – last season for his efforts with Huelva.