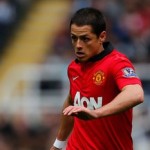 The Sunday Mirror reported that United are willing to cash in on Mexican star Hernandez, who wants a move because of a lack of starts at Old Trafford.

Valencia have made their interest known are confident they can sign the former Chivas star.