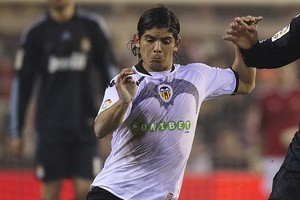 Ever Banega’s form for Valencia has attracted the interest of Real Madrid.

The former Atletico Madrid flop has been outstanding for Valencia this season and won praise from star striker David Villa last week.

It is now reported in Spain that the Argentine’s form has sparked interest from Real Madrid.

It is also said that general manager Jorge Valdano has already been in touch with Banega’s minders to register their interest ahead of the summer market.