Reports are out claiming that Valencia midfielder Sofiane Feghouli is tightlipped on reports linking him with Barcelona. 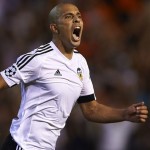 Feghouli has been mentioned as a replacement at Barca for Pedro.

“I cannot respond to a rumour or article in the press. If there had been contact, maybe I would react in a way, but now I am concentrating only on Valencia,” said Feghouli told Goooaal.com.

“I leave these matters to my agents. I am only concentrating on performing on the pitch,” added Feghouli, who, however, confirmed that he could renew his contract at Valencia, which expires in June.

“My agents are working on that and I am hoping that both sides can reach an agreement.”