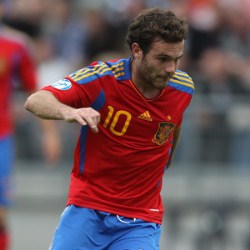 Bad news for all Arsenal fans as it has bee revealed Valencia coach Unai Emery has declared that the club would not sell Juan Mata.

Last week the Gunners were in talks to sign the Spanish international, who had a £22 million release clause in his contract that has since expired.

With Arsenal dragging their feet over this summer’s transfer targets – they have already reportedly seen a relatively low bid for Everton defender Phil Jagielka rejected – it seems another top player could be out of their reach with Emery insisting Mata would stay.

“Mata has gone through a process of doubts about his future,” Emery said after the 23-year-old scored Valencia’s first goal in a 2-1 friendly win over Hamburg.

“But now we all believe he will stay at Valencia.”

The Premier League club were believed to be holding out for news about the futures of Cesc Fabregas and Samir Nasri before committing to an offer for Mata, with the midfield duo tipped to join Barcelona and Manchester City respectively.