It has been reported that Valencia are launching a bid for Manchester City striker Edin Dzeko. 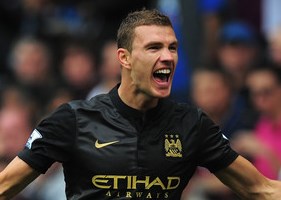 The Daily Mail reported that Singapore businessman Peter Lim has promised £30million will be available to spend in January should his takeover of Valencia be completed and that would leave around £5m change from City’s valuation.

However, his wages of around £130,000 a week would still be a sizeable hurdle even if City agreed to sell.