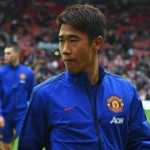 Reports have emerged claiming that Valencia are ready to rescue Shinji Kagawa from his Manchester United nightmare.

Super Deportes claims that new Valencia owner Peter Lim is eager to bring the Japan international to Spain and willing to bankroll a bumper offer to convince United to sell.

Valencia are turning to Kagawa after being frustrated in their pursuit of Benfica midfielder Enzo Perez.

Nuno, Valencia’s new coach, wants a midfielder and striker signed before Monday’s deadline. He is happy with Los Che’s move for Kagawa.

The Japanese was forced off early with concussion during United’s Capital One Cup humiliation at MK Dons this week. Nani Delighted To Be Back On Man Utd Scoresheet