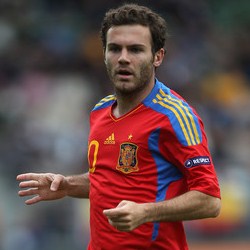 The father of Juan Mata has revealed that Arsenal have had an initial offer for the Spain international rejected by Valencia, but believes the Gunners will continue their pursuit of his son.

Juan Manuel Mata Rodriguez, the player’s father and agent, also suggested Inter Milan would be a suitable destination for the 23-year-old Mata to ply his trade as a move away from the Mestalla looks increasingly likely.

“Valencia simply rejected their offer. After some hesitation they answered ‘no’ to the Gunners’ offer.

“So my son remains a Valencia player, for now. But I don’t think it’s their last offer,” Rodriguez told calciomercato.

Mata has been widely linked with a move to the Premier League this summer with north London rivals Spurs and Arsenal reportedly leading the chase.

The winger’s father added: “There are several offers for Mata and I think that Arsenal will come forward again. The situation is still evolving.

“Are Inter Milan one of the interested teams? I know my son holds Milan in high esteem. We’ll see if Inter will come forward directly.”