Reports are out claiming that Valencia are chasing Chelsea midfielder Thorgan Hazard. 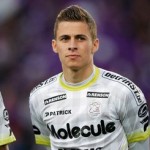 The young Belgian is set to become available for loan.

The Daily Express reported that Liverpool and Everton are keen to acquire the playmaker’s services as they both prepare for European football next term.

But the Premier League duo will face competition from La Liga outfit Valencia, as they look to bolster their attacking options for another Europa League campaign.

Hazard – younger brother of Blues star Eden – is yet to decide on a destination, according to his father Thierry.

He said: “We will quietly look at all the offers and see which one Thorgan is most comfortable with.”