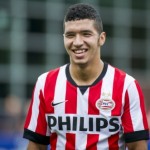 Reports are out claiming that Valencia are in advanced talks to land PSV Eindhoven winger Zakaria Bakkali.

The 19 year old Belgium international is off contract in June and wants to continue his career in Spain.

Fussball Transfers says despite Arsenal, Manchester United and Chelsea all keen, Bakkali has agreed to join Valencia next month.

The midfielder has been dumped to the reserve-team at PSV this season after refusing to consider new contract talks.

Valencia are expected to sign Bakkali before sending him on-loan to a smaller Primera Division rival next season.