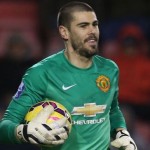 Their interest raises the prospect of a swap involving wantaway defender Nicolas Otamendi.

The Daily Mail reported that Valdes stayed behind from Manchester United’s US tour to receive physio treatment on Tuesday but he is open to a move.

He could yet be part of a deal for Otamendi, although other clubs are also keen on the 33-year-old former Barcelona keeper.

Otamendi is threatening not to turn up for Valencia training until his future is resolved.