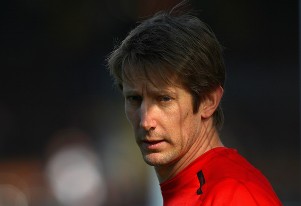 Interesting news are out and it has been reported that Manchester United goalkeeper Edwin van der Sar has admitted that he is amazed that he has lasted six years at Old Trafford.

Former Dutch international Van der Sar continues to defy the years with agility, athleticism and an undimmed appetite for the game but is shocked that he is still with the Reds after almost six years.

He revealed: “I arrived when I was 34 and I thought that I would be here for two years and then maybe do something else.

“I wanted to try to win the league title and end my career maybe with Ajax and then call it a day. But at the moment I’m still going.

“At a certain age you are happy that you can still do this great job. People have kept on asking me the same question for the last four years: when will I finish.

“Two years ago people were saying I’d soon be 40 and it was coming closer and closer, but I still feel good.

“I watch what I eat and drink, and training is good. I’m quite fortunate in not having that many long-term injuries like knee ligaments and that kind of thing. No Way Back At Man Utd For Paul Scholes David De Gea : I Have To Adapt Quickly!