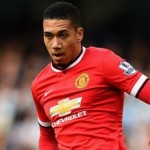 It has been reported that Manchester United boss Louis van Gaal admits Chris Smalling apologised to his teammates after defeat at Manchester City.

The England international defender saw red before halftime with the scores locked at 0-0.

When asked whether Smalling had apologised to his team-mates, Van Gaal said: “He said it very humbly. You can only accept it. But nevertheless it was in my opinion not so smart.”