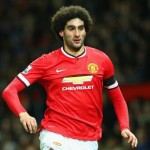 After failing to break down Cambridge in the first tie at the Abbey Stadium, the policy of having another route to goal paid off against the League Two side at Old Trafford.

“With Fellaini, we have always also an attacking point through the air,” van Gaal told MUTV.

“Cambridge have very tall players and we could score also in the air and not only along the floor. That was our game plan and he [Fellaini] confirmed that [his aerial prowess] again.