It has been reported that Manchester United boss Louis van Gaal believes Victor Valdes has it in him to go after David de Gea’s number one spot at Old Trafford. 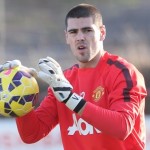 The former Barcelona goalkeeper officially joined the Red Devils on Thursday on an 18-month deal and although he will start out as the club’s number two, van Gaal feels he still has the competitive nature to try and oust his fellow Spaniard.

“Nobody is happy to be number 2 and he has to have ambition to beat David De Gea – but it shall be very hard for him,” said van Gaal.

The Dutchman also added that Valdes had proven himself to United after a three-month training stint which took in rehab on a serious knee injury he suffered during the end of his career at Barcelona.

“When we invite Victor Valdes to have his rehabilitation here in Manchester United you do that for him and also for yourself,” he added.

“You have the chance to see his rehabilitation but also if his quality is still the same and he has confirmed both.” Bayern Munich To Include Robben, Muller In Bid For Man Utd’s Di Maria

David De Gea : I Have To Adapt Quickly!