It has been reported that Manchester United boss Louis van Gaal has assured Adnan Januzaj of his future at Old Trafford. 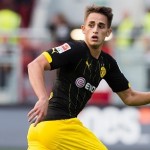 Januzaj has been sent to Borussia Dortmund on a season-long loan after United turned down several offers from other top European clubs to buy him.

The Sunday Mirror says the 20-year-old was so shocked to be shipped off to Germany that he feared his days at the Old Trafford giants were numbered.

But Van Gaal has taken time to allay those fears – and has done the same with Tyler Blackett after the young defender was loaned to Scottish champions Celtic.