It has been reported that Manchester United boss Louis Van Gaal rued his side’s bad luck following their League Cup defeat against Middlesbrough in a penalty shootout on Wednesday. 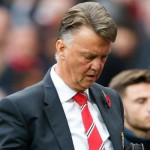 Van Gaal said poor fortune was the reason his side were unable to win last weekend’s Manchester Derby and he believes luck deserted the Red Devils again against Boro.

“We were unlucky. I said after City also that was also 0-0. You have to force luck also and we didnt do that – we didn’t score,” van Gaal said.

The Dutchman believes that his side had three legitimate claims for penalties in the game, with Daniel Ayala’s handball in extra time being the stonewall penalty.

He added: “You know because that was not first handball already. I think there are more than that – three penalty cases. You need that luck.”