It has been reported that Manchester United defender Tyler Blackett has revealed that manager Louis van Gaal convinced him to join Scottish champions Celtic. 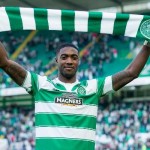 The 21-year-old defender has joined the Hoops on a season-long loan deal and is excited to get an opportunity with the Hoops.

“I spoke to him [Van Gaal] yesterday and he said it would be good for me,” Blackett said.

“A good experience to get the games that I need, which obviously I couldn’t get at United right now, but to come here and play at this level is always going to be good for my development.

“United is obviously a big, worldwide club and with the players they are bringing in, it is always difficult for young players but it makes the challenge more of a step forward.

“It means you have got more to look forward to and you’ve got to try break in and hopefully this can be a platform for to do that here as well.

“I spoke to the manager and said I want to play first-team football and for me to go out on loan to a good club like Celtic is the right way forward.”