It has been reported that Lyon fullback Rafael admits he didn’t get along with Manchester United boss Louis van Gaal from day one. 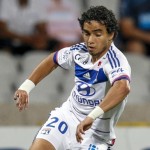 He told Globo Esporte: “When Van Gaal arrived, it quickly became clear that I would play little.

“A footballer always wants to play and a footballer who plays, is happy.

“My relationship with Van Gaal was pretty normal. Of course he has his own way of communicating and has his temperament, but I have too.”

Rooney : I Am Surprised To See Chelsea Far Behind