It has been reported that Louis van Gaal suggests Wayne Rooney is so determined to win the FA Cup that he will do everything he can to motivate his teammates. 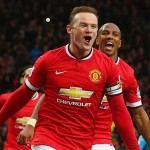 The Red Devils meet Arsenal in the quarter-final of the famous cup competition on Monday night and van Gaal is expecting his captain to show brilliant leadership as he did late in the 1-0 win over Newcastle United on Wednesday night when chasing a loose ball that led to the winning goal.

?“I don’t know how Rooney will motivate the dressing room for the FA Cup but I think he shall do that because he is very motivated as a captain and a player and he wants to win a title and he has not won the FA Cup,” said van Gaal.

“And that is something that is missing. My first championship with Ajax was very important for me, it was also an emotional thing.

“You have seen how Wayne was motivated in the last minute of the game you saw him running and pressing for a lost ball and that was fantastic.

“Every human being has his own identity and character and this is Wayne’s character and he has also picked up red cards because of that character but against Newcastle it was fantastic.”?