It has been reported that Holland coach Louis van Gaal explained his decision to throw on Newcastle United goalkeeper Tim Krul for their penalty shootout win over Costa Rica. 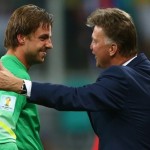 The Man Utd boss raised eyebrows when he introduced Krul at the 121st minute of a World Cup quarter-final against Costa Rica.

It paid off, as the substitute saved two out of five Costa Rica spot-kicks to book a semi-final date with Argentina.

“There is no question about who will start next game, it will be Jasper Cillessen. But we felt Krul was the better choice here,” explained Van Gaal.

“We told Krul that he would be a possibility for the penalties, but we didn’t tell Cillessen, as we didn’t want to ruin his preparation.

“We have practiced penalties, I believe when you’re used to a certain shot you’ll be more comfortable taking that shot.”