It has been reported that Chelsea legend Ruud Gullit feels Manchester United won’t be genuine title challengers until next season. 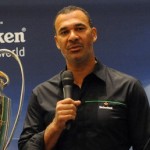 “You have to give Louis van Gaal some time. He cannot change it right away. That’s impossible,” argued Gullit.

“José Mourinho needed a year. Last season was very disappointing for Mourinho. He was not accustomed to that.

“Van Gaal is getting them ready for next season. He has good players in attack, but not in the defence.” Liverpool Hoping To Have Balotelli Fit For Man Utd Clash