It has been reported that Manchester United manager Louis van Gaal felt Sunday’s 2-1 win over Liverpool was one of the most important of his career. 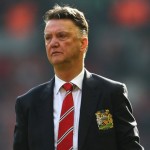 The Red Devils defeated their old enemies at Anfield thanks to a double from Juan Mata to move five points clear of the fifth-placed Reds.

?The pair of Mata goals came either side of Steven Gerrard’s sending off, which happened less than a minute after he came on at half-time, before Daniel Sturridge pulled one back for Liverpool but it wasn’t enough as van Gaal was left to revel in the triumph.

?”We beat them again with their own weapons and the pressure on the ball,” he said.

?”Now the gap is five points ahead of Liverpool and six ahead of Tottenham and Southampton so the moment to win is one of the most important in my career.

?”The first half was very good because I knew in advance Liverpool would press us and they did and we played them off the pitch.

?”We scored a fantastic goal and gave nothing away so it was a superb first half.”?