It has been reported that Manchester United boss Louis van Gaal is pleased Angel di Maria is off the mark after victory against QPR. 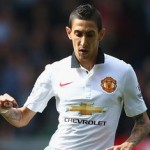 Di Maria, making his first home appearance, opened the floodgates with a sublime free-kick straight from a training field move, but other aspects of his new-look side were also praised by the boss.

“The first goal is very important, we trained with it before the game but he did it at the right moment. I think the new players fitted in very well. It’s always difficult to come in and adapt to the rhythm of the Premier League but they did very well – not only Di Maria.”

The importance of sending United’s fans home smiling was also not lost on the manager, who added: “That’s also enormously important as they have had to wait a long time for a good result.”