Reports are out claiming that Manchester United boss Louis van Gaal has no problem with Sir Alex Ferguson’s involvement at the club. 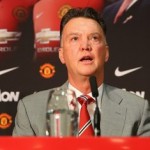 His predecessor David Moyes was always shadowed by Fergie at home matches with cameras homing in on Sir Alex in the directors’ box when results went against the club.

But the Dutchman can handle Ferguson’s presence at Old Trafford and will not feel under pressure.

The 62 year old added: “I don’t think it’s a big problem. I put more pressure on myself than others do.

“I will have a drink with Sir Alex Ferguson. We like each other. The aim is to bring United back to the No.1 position. It’s a fantastic challenge.”