It has been reported that Manchester United boss Louis van Gaal has indicated that Robin van Persie did not contribute enough last season. 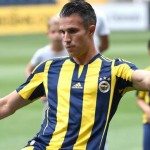 The Dutch international was sold to Turkish club Fenerbahce recently with van Gaal suggesting that perhaps the former Arsenal striker did not give enough for United as the club fell to fourth in the Premier League in 2014/15.

“You have to oversee all the aspects,” he told the Daily Mail of the decision to offload van Persie.

“People have written that van Persie is my favourite player and that I protect him and yes maybe I have done that.