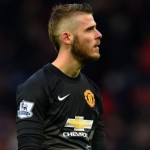 Manchester United boss Louis van Gaal has revealed that he has replacements lined up should David de Gea leave.

With reports in Spain stating that De Gea has agreed terms on a deal with Real worth over £3.6million a year, the writing would appear to be on the wall.

“We know who already shall be the next goalkeeper,” the Dutchman said.

“We have a list of goalkeepers who can replace him because we have to be organised also, not only for that position but every position. We want him to stay so hopefully he shall sign.”