It has been reported that Manchester United manager Louis van Gaal believes that his side are on course of earning a place in the knockout stages of the Champions League despite the draw against CSKA Moscow. 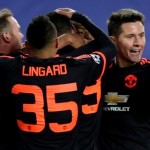 United have not enjoyed the best of form in Europe’s top club competition so far this season and following their 1-1 draw against CSKA, the Red Devils currently have only four points from their first three matches.

Despite the less than impressive start though, van Gaal is not getting too worried and believes that his side are in a very good position to qualify for the knockout stages of the Champions League.

Van Gaal said: “We now have two home matches and you can say we are very strong at home and I hope we can win these games so we are nearly qualified or qualified, but we also have a game away to Wolfsburg.

“We are on schedule after the PSV Eindhoven defeat, which was a very strange defeat for us.” David de Gea Thanks Man Utd Fans For Their Support