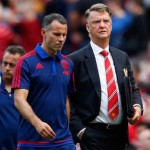 Van Gaal has less than two years to run on his contract – and is expected to genuinely challenge for major honours this season.

Whether Martial can ease the goal-scoring burden on Wayne Rooney and turn United into serious title contenders remains to be seen.

Speaking at a supporters event on Wednesday night, Van Gaal said: “Yes I spend a lot of money on Martial – but I buy him for my successor, Ryan Giggs.”