Reports are out claiming that Manchester United boss Louis van Gaal says he will continue with Wayne Rooney in midfield after victory over Burnley. 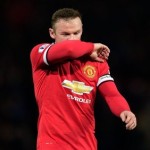 With United so poor up front, moving Rooney – the third-highest scorer in the club’s history – into attack would seem a plausible move, but Van Gaal thinks his team play better with his captain in midfield.

“I was very pleased how he replaced Daley Blind in the number six position.

“He showed composure and of course he was also today the Rooney that I want to see but he has showed that he can play in every position.

“Maybe he can better play in a striker’s position but then I have a problem in midfield.”