Louis van Gaal has declared that victory in the Manchester derby next weekend can lift Manchester United into a strong position. 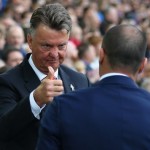 The Red Devils returned to winning form with a 3-0 result over Everton on Saturday after they were humbled at Arsenal by the same scoreline before the international break.

The victory has United sitting third on the table, two points off league leaders Manchester City, but van Gaal’s men can shake things up if they get the better of their crosstown rivals at Old Trafford next Sunday.

“I am very happy with the response of my players and I am very proud of the performance,” van Gaal told the club’s official website.

“I think it was an excellent performance and maybe it is the start of many, many victories.

“We have to be more consistent, so next week when we win against Manchester City then we can say, ‘OK, now we think maybe about title aspirations’.”