Reports are out claiming that Manchester United are stepping up their pursuit of SC Heerenveen star Daley Sinkgraven. 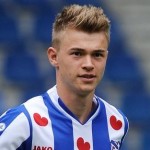 The Sunday Mirror reported that Louis van Gaal is worried that the Old Trafford giants may lose out on the 19-year-old attacking midfielder to Real Madrid, Barcelona or Liverpool after some eye-catching performances for Heerenveen this season.

He has ordered his scouting team to bring him more detailed reports about Sinkgraven’s progress with a view to agreeing a deal with his Dutch club in January.

Van Gaal knows all about Sinkgraven’s background – the player’s father, Harry, played for Groningen and Zwolle.

Any deal is likely to see the player stay with Heerenveen until the end of next season to continue his footballing education.

Xavi : Barcelona Were Much Better Than Real Madrid!