It has been reported that Chris Smalling has revealed what Manchester United’s Louis van Gaal was thinking at half-time on Wednesday night. 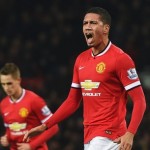 The Dutch tactician was infuriated by United’s performance in the first 45 minutes against Burnley at Old Trafford despite the fact his side were leading 2-1.

The Red Devils went on to salute 3-1 to move back to third place on the Premier League table but defender Smalling, who netted with two headers, said van Gaal was not in a good mood after the Clarets outplayed them up until the break.

“I think the manager was shocked at half-time,” said Smalling.

“The manager said in the dressing room that the first half was unacceptable and all the players know that.

“It wasn’t a 3-1 scoreline game. Especially in that first half, we all let ourselves down. We could have played much better.

“That the first half was probably the worst we’ve had all season, we were lucky to go into the break with a lead.

“We knew that it wasn’t good enough in the first half. We were lucky to get away with it, and we had to stand up and fight in the second-half.”