It has been reported that Manchester United boss Louis van Gaal took aim at Paul Scholes after their 2-0 win over West Brom. 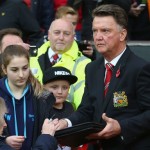 United maintained their grip on fourth place on Saturday when they beat 10-man West Brom 2-0 thanks to goals from Jesse Lingard and Juan Mata.

The Dutch tactician believes supporters must not automatically fall into line with Scholes’ opinion – aired earlier this week – that United are boring.

“I was pleased how they reacted against CSKA Moscow because you have to accept that fans have their own opinion but I think they were very influenced by Paul Scholes and all the criticism and what the media has written about that and then you to have to analyse the game also against CSKA Moscow,” the United manager said.