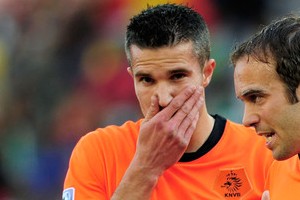 Van Persie missed most of the last season with an ankle injury but feels that it may be a blessing in disguise as he strives for victory with the Oranje.

“We’ll have to see in the next couple of weeks whether that’s the case,” said van Persie. “But I feel very, very fresh.

“I know some of the boys have been tired with the travelling and stuff, but I don’t mind waiting around for two hours or staying in a hotel a long time because I’m back with the team.

“Physically and even mentally, there’s more to come. You can be very tired when you start a tournament after playing 60 or 70 games in a season, but I’ve only played 25 and I’m ready physically and mentally.

“I recover quickly after games and the physios are working very hard with me, so it’s looking good.”