It has been reported that Manchester United manager Louis van Gaal has admitted that he informed striker Robin Van Persie that he was no longer needed at the club during a game of golf. 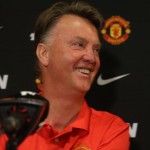 Van Persie starred for the Red Devils in his first season at Old Trafford, helping them seal their latest league title, but has since struggled under van Gaal and his predecessor David Moyes.

Having sealed a deal with Turkish giants Fenerbache earlier this week, van Persie is set to leave Old Trafford after three years, and van Gaal has explained how he had informed the former Arsenal hitman.

Van Gaal said: “Every decision is difficult, not only to catch [sign] players, but also to let them go.”

“I had the conversation with him at the end of the season after we played golf one day so he knew already what was coming and I think he has made a very good choice [in moving to Fenerbache].”