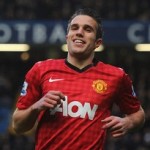 Arsenal will be hoping that they do not have to embarrassed themselves and perform the “guard of honour” for former Gunner Robin Van Persie when Man Utd face Arsenal on April 28th.

The People says United can run out as newly-crowned champions when they play at the Emirates on April 28 if they get more points than Manchester City over their next three matches.

If that happens, Van Persie can expect a corridor of applause from his old team-mates when he appears at Arsenal for the first time since his controversial £22.5million transfer.

Van Persie’s return could be a bit embarrassing for Arsenal, after their former striker – now a hate figure for many Gunners fans – walked out on the club last summer in pursuit of silverware.