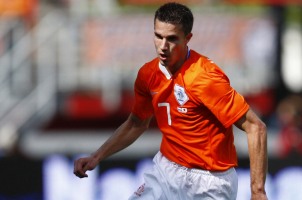 Arsenal striker Robin van Persie has had his ankle injury confirmed as ruptured ligaments and the striker could now be out for the entire season.

Van Persie was left in agony 10 minutes into Holland’s goalless friendly with Italy on Saturday after a challenge from defender Giorgio Chiellini.

Van Persie, now age 26, was in Amsterdam last night undergoing scans as medics looked to rule out any fracture to the joint.

They have confirmed that the ligaments are torn, though Van Persie remains optimistic by saying that he will probably be out for between four to six weeks.

Wenger told reporters that the footage does not look that bad but the seriousness of the injury does seem to be.

Arsenal are second in the table and Wenger will be hoping the loss of the Dutchman does not mirror striker Eduardo’s situation from two seasons ago.