It has been reported that Arsenal skipper Thomas Vermaelen has been assured by Belgium coach Marc Wilmots that he’s in his World Cup plans. 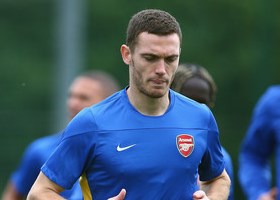 The Daily Mail revealed that his lack of action left the central defender fearing he could lose his place in Wilmots’ squad for Brazil 2014, which in turn left Arsenal chiefs apprehensive over his plans for the transfer window.

The 27-year-old is settled in London, recently becoming a father, and has always maintained that he would prefer to stay and fight for his place.

Wilmots would prefer his key defender to be playing on a more regular basis but given Vermaelen’s international experience — he has won 44 caps — the Belgium coach considers him an important member of his squad though his lack of first-team football could affect his chances of securing a place in his starting XI.