It has been reported that Arsenal boss Arsene Wenger sees new signing Alexis Sanchez as an initial wideman. 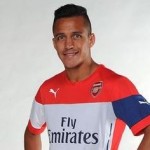 It is said that the 64 year old plans to use versatile Chile international as a winger while he waits for Theo Walcott to return to full fitness.

He said: “At the moment he might play on the flank because Walcott is injured.

“He can play through the middle, he can play on both flanks and he has the qualities that I think are needed in England.

“He’s brave, works hard and all these qualities together made me go for him.”