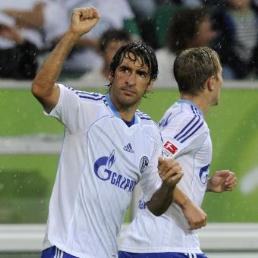 VfL Wolfsburg striker Mario Mandzukic scored twice, including with the winner eight minutes from time, to give his team a 2-1 victory over Schalke 04 on Sunday and end the 2009 champions’ three-match losing streak.

Spaniard Raul — who was Magath’s biggest transfer coup at Schalke last year — needed only 13 minutes to strike, volleying in a clever chip from Peruvian Jefferson Farfan to put the visitors in the driving seat.

Wolfsburg quickly recovered and levelled with Mandzukic heading in from close range after being left completely unmarked.

With Schalke offering little further threat, the hosts gradually grabbed the initiative in the second half and snatched the lead when the Croatia international deflected a Marcel Schaefer free kick into the net.