It has been reported that Spain coach Vicente del Bosque denies they’ve been “weak” omitting Chelsea striker Diego Costa from his latest squad. 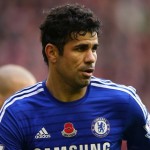 The former Atletico Madrid striker played against Liverpool on Saturday, but was left out of Spain’s squad this week over injury concerns.

Del Bosque explained: “There’s nothing to say about it. I’m sure that some might view it as a sign of weakness on our part but that simply isn’t the case.

“We are football people and all of us understand Diego’s situation perfectly. I said the other day that he would play against Liverpool and I was proved right but putting him through two extra games would be counterproductive for his health which is why we decided against calling him.”

Drogba : Ivory Coast Can Be Proud Of World Cup Campaign